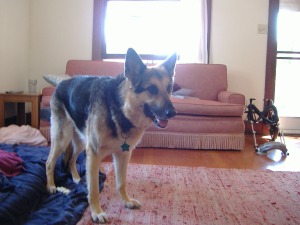 Photo: Yesterday, Ali stood up and took a couple steps off his bed when he noticed I was getting his peanut butter Kong from the freezer. He has been doing this more lately – standing up on his own and taking a couple baby steps without falling over.

It has been six months since Ali’s surgeries and he continues to make functional progress. We are back at Animal Care Center doing underwater treadmill therapy once a week. Although Ali balked at the treadmill the second time, he is doing okay with it now. We think it is probably because his confidence level is higher as he is much stronger and has more mobility in his hind limbs. I have also worked hard to make it fun and not stressful for him. It’s not too difficult. He is so social that he loves going there and seeing people, and I just make sure I have lots of treats on hand along with a tennis ball to distract him. He has been walking 6-10 minutes on the treadmill each time. In the water he takes independent steps with both legs, but needs assistance with placement of his right hind leg.

Out of the water, he can take active steps with his left hind leg and his right hind leg is showing motor function down to about the knee, according to Juli. I think this is amazing considering his right leg was barely moving at all a few weeks ago. I don’t know if it’s a coincidence but it was when we started acupuncture that I noticed his right leg started to make subtle movements; now it is moving quite a lot in the cart! We also raised the cart about an inch and now he can take active steps with his left leg while in the cart. Before he was not able to clear the ground and place his left paw – he would “knuckle.” But with the added height he can take actual steps, which should be good for him. (Although the added height has caused us to have to make some other adjustments to the cart involving foam and duct tape – looks pretty DYI but we need to make sure the added height does not pressure his front shoulders too much. It’s challenging to get the correct balance.) The right leg is moving some, but not making complete steps. He continues to stand up on his own and it seems much easier for him now. I think is making great improvements with his balance. He can almost take a few steps on his own and he is really good about catching his balance if he starts to sway – he is able to reposition his left leg pretty well to catch himself.

We continue to go swimming as often as we can, which usually is not more than once a week, but ideally I would take him every other day if I could. There are just no good swimming spots around. The Petaluma River, close to our house, is really an estuary and as such is subject to the ocean tides. If it is low tide it is very treacherous to try to swim Ali there (speaking from experience – Ali and I have both sustained minor injuries on the exposed rocks. Luckily, I haven’t face planted on these jagged rocks yet, a fact Maggie was marveling at last time we were there. It’s only a matter of time, though, if we keep turning up there at low tide, and it will be extremely counterproductive if one of us gets seriously injured!). It is really only safe to go when the tide is high, but it only happens occasionally that the tide is high enough either after work (but before dark) or on the weekend during daylight hours. Plus, I am dependent on Maggie’s schedule and availability because I cannot take him out without assistance and she is my only friend in this godforsaken little town. Even more rarely we make it out to the Russian River, about an hour’s drive away. I go whenever I can, though – which means whenever one of my two friends who live out there can accompany me and Alec. I try to make it happen as often as I can because, although it’s hard trying to coordinate, I think swimming is the best thing for Ali to do regularly. I really think it has contributed immensely to his back strength, and I’m sure coordination as well.

We also continue to do acupuncture, once every 1-2 weeks, as well as standing exercises at home.

Alec’s official status at this point is “ambulatory with assistance; mild-moderate pelvic limb paraparesis.” Paraparesis means a slight paralysis or weakness of the hind legs – as opposed to paraplegia, which is complete paralysis of both legs. After his surgeries he was classified as “non-ambulatory and deep pain negative” and then “ambulatory paraplegic.” So parapetic is the proper word to describe his current condition, not paraplegic. In case you’re interested in the fine points. I am.

The neurologist had noted on his three-month evaluation report that “peak recovery may occur at 3-6 months post-injury; however recovery continues through a patient’s lifetime.” So this six-month mark is a little scary to me. I know it shouldn’t be, but as long as these improvements, incredible improvements, really, occurred before six months had passed…I don’t actually know. I just know I heard myself saying proudly several times when people remarked on this or that improvement he had made: “And it hasn’t even been six months yet!” Well, now it has been six months and part of me is afraid that he will stop progressing. I mean, that has been my fear all along. And it is not an ungrounded fear; nobody knows what will happen. The physical therapists talk a lot of being “realistic” but also “optimistic.” There are no guarantees in this field, and I remind myself of that a lot when I realize how far he has come and how grateful I am for that. I just really hope his right leg improves the point his left leg has, but that is not a given. Mobility could stop at the knee. But I guess I need to focus on the optimistic part of the equation. I feel like I have done a good job of balancing the realism/optimism equation thus far (of course, Ali’s amazing progress has helped with that!), and I know the six-month mark is just an approximate guideline; of course I know that. Juli has a client whose dog is two years post-surgery and just started walking on her own. So, we won’t give up! Bring on the next six months…I’m ready. And really thankful for how far he has come in just six months.