Cart tracks in the snow. 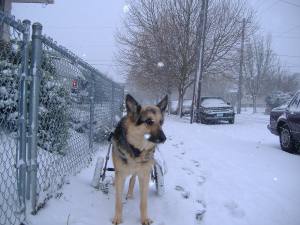 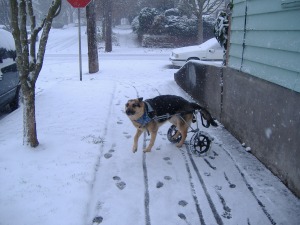 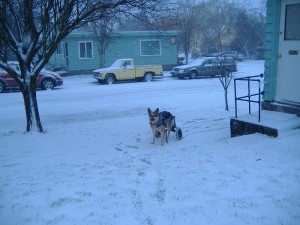 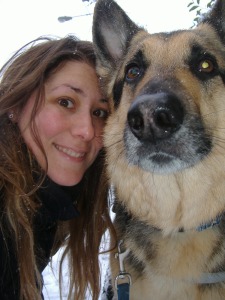 I was told repeatedly upon moving here that it never (or extremely rarely) snows in Portland. So when weather reports started calling for possible snow this weekend, the natives scoffed. Sure, it snows in the hills and higher elevations, but not in the city, they said. So as I was lying in bed this morning listening to NPR, I was surprised to hear the announcer say that chains were now required on I-5 in the Portland metro area and that sections of local highways were closed. What?! Could it be…? Sure enough, I got out of bed and opened the curtain to see a blanket of white outside; and it was still snowing! Of course, I put Ali in his cart right away (even before coffee!) and out we went. Ali must have seen snow in N.J. during the first two years of his life, although I’m not sure how much. When he was living in the kennels at The Seeing Eye (where I worked for a year, and where I met Alec), he only went outside for a half hour during those days when he was scheduled to go into town for training. That whole year was mostly indoors for him (except when I would come on the weekends with my trainer friend and take him out for surreptitious walks around the sprawling grounds – shhhh. It was so rewarding to see him get to go outside. He was often anxious and frantic in his kennel and never had a chance to be a “dog.” It broke my heart every day to see him so frustrated). And his first year of life was spent in the home of a “puppy raiser” 4-H family who apparently neglected him to the point where they were removed from the program (they pretty much kept him in his crate or tied up outside alone for long periods of time – a puppy!). So I’m not sure how many times he experienced snow in N.J. by the time he came to live with me, I was living in Georgia. We had snow once in Athens, but it was the kind of snow where the blades of grass were still visible. Today, it’s real!

So I got him “saddled up,” and when I threw open our front door the expression on his face was comically quizzical. He hesitated; what’s this stuff here? Then out we went, him squinting in the snow, not quite knowing what to make of it. At first I think he wanted to go back inside. (He is not a big fan of the rain, so I think in his mind snow might be of the same ilk: stuff falling from the sky? On me? Not cool! It was also quite windy and cold – 24 degrees! I know that’s not cold for other regions of the country, but it sure is here. I’m new here and all, but I have done my research and the annual average low temperature is about 40 degrees.). But then he relaxed, probably in part because my energy was pretty happy/excited. We walked around the neighborhood and at one point I let him off his leash in a parking lot so I could capture the moment on video (from what I understand, this “snow in Portland” thing is rare, indeed!) and he started frolicking like a silly puppy. He did great in the cart, and its wheels were packed with snow when we got back home. Now he is snoozing like the angel he is after our small and unexpected adventure.

In general, Ali is doing really well, getting around better and better outside his cart, and continuing to improve. More updates soon…we have to go out and play some more in the wintry wonderland! The sight of his little tire tracks in the fresh snow makes my heart feel warm.

3 responses to “Cart tracks in the snow.”