Hoping for the best.

Alec in the van after getting sprung from the emergency hospital…let’s go home! 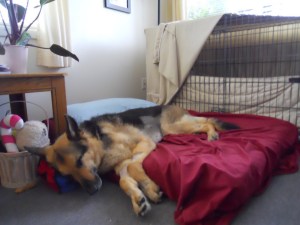 Nap time! When we arrived home, Alec whined fussily for about 15 minutes and then passed right out. Adorably, he is using his cube toy as a pillow.

After two days in the emergency hospital, Alec is finally home! He is doing well post-operatively. The last couple days he was being monitored for heart ayrrhthmias (very common after splenectomies, apparently – if the irregularities had persisted he would have been put on heart medication, but he did not need it). They were also monitoring his red blood cell count and warned me he might need a transfusion after surgery because of how much blood he lost. However, we were lucky and he did not need that either. Finally, they wanted to make sure he was eating well (and not vomiting) and doing okay on his oral pain meds before releasing him. Although he was picky when the staff fed him, he ate heartily for me when I visited him yesterday and he kept it all down so I got the green light to bring him home this morning. I am so happy he is home with me!

When he saw me, Alec began to whine excitedly (he is a very whiny little boy). Because they brought him out the side door directly into the parking lot, and not into the exam room where we had had our visits, I think he knew he was going home. I was nervous about lifting him into the van but that went okay. He has staples in his abdomen and I had to alter the way I normally lift him in and out of the van. I am hoping to not have to transport him while he is healing. The staples have to stay in for two weeks, and he is on pain medication, but nothing else for now. He has activity restrictions due to the staples and his incision, but basically these are the same restrictions he already has because of his back (plus very short walks for now). I was so worried they might hurt his back inadvertently in the hospital. Each time I talked to a new tech or doctor: “And you know about his disability, right?…Okay, just checking!” They were all great and assured me they were being very careful and that there was a big sign on his kennel alerting staff to his back issue.

I look for good news where I can find it, and upon discharge I was happy to learn the final bill was less than the estimate they had given me (because he did not need the blood transfusion or have other complications). The total was $3,887 and I have one credit card that is still within a 6-month introductory period with 0% APR (I actually got it in Feb. to pay for Alec’s new rehab treatments in Corvallis – the ones that unfortunately did not work!). This credit card has a $5,000 limit, and with the $1,000 for the rehab treatments from last month, I still had just enough room to put this bill on it, which is good because my other two credit cards are not in introductory periods and have high APR’s (I originally got both of those for Kobi’s chemotherapy treatments a few years ago and now retain them for emergencies, aka vet bills). Not that I will be able to pay this off in 4 months, but I am glad the interest will not kick in right away!

Of course, we are not out of the woods. Today’s bill is truly the least of my worries. Alec’s spleen and the grapefruit sized mass that had ruptured, along with a biopsy of his liver, were sent to the lab and I will not learn the results until next week – they said probably Wed. or Thurs. They told me the regular statistics are 60-70% chance it is malignant, but given his age (9) and breed, the chances is higher. Not the greatest odds, but I am hoping for the best: a benign hematoma. If it is malignant, we will have to begin chemotherapy right away, as this is an aggressive type of cancer. So there is a lot more potentially coming down the pike at us, financially and health-wise, the latter of course and without saying always being the most important, but I am scared about hitting the limit on all my cards eventually (it happens fast; I was credit card debt free only a month ago!). But I will cross that bridge when I come to it. Step…by…step. I am trying to keep my thoughts positive.

For now, he is home! He was so cute when I brought him inside. He lay down on his bed and whined softly for about 15 minutes (I think he was just “telling me all about it,” if you know what I mean). I assured him I was very sorry for leaving him at the hospital for two days but that it was for the best, etc. He even let me cuddle him a bit! Usually my attempts to cuddle him elicit escape attempts, but I think he did not mind being babied a little as I listened and sympathized. It was the cutest whine; I am no dog translator, but I think the meaning was transparent: “I am happy to be home but I did not like being in that hospital at all!” Then suddenly he just fell asleep – passed right out on his bed (yes, he is breathing! Of course I checked!), and now his little paws are twitching as he is probably dreaming about his stay in the ICU. Poor little guy is tuckered out. He went from whine, whine, whine to fast asleep in 30 seconds. I hope he continues to sleep and rest. I know he did a lot of sleeping in the hospital, but I think being home in one’s own bed is different.

We have been fortunate so far. His surgery was a success and his surrounding organs looked good. There were no masses on his lungs (they x-rayed those before surgery). He has recovered amazingly well from surgery so far (knocking on wood!). And dogs can live just fine without their spleens, in case you were wondering. Finally, when it happened, I was here with him and brought him in very soon after noticing he was acting strangely (thanks again to Daniela, the wonderful receptionist at my regular vet, who when I called strongly advised me not to wait). This could easily have happened next weekend when I was at a work conference on the east coast. I had planned for a couple friends to take turns watching him, but I doubt they would have been as alarmed as I was by his sudden lethargy; they probably would have thought he was just depressed that I was gone. They obviously don’t know him as well as I do, and likely would not have realized how strange his behavior was or that it was an emergency situation. I almost didn’t (and if you have been reading this blog you know I am borderline obsessive about observing Alec, just because of all he has been through). He could have easily bled to death if much more time had gone by. So if this was going to happen, we have been lucky so far.

I just need our luck to hold out a little longer. I appreciate all the well wishes and support. It really means a lot. If you could do me a little favor and make a wish for a benign hematoma for Alec, I would be so grateful. I know so many people are pulling for him and thinking good thoughts and it helps so much.

And now…I wait. Love is not easy. It holds the potential for the greatest joy but also the deepest pain. The hardest part about truly loving someone, at least for me, is the intense desire to protect them from harm. You try to do everything in your power to keep them safe, but still there are things you cannot control. That’s where the hope comes in.

4 responses to “Hoping for the best.”